These sweet caramelized onion tarts are the perfect sweet and savory treat to serve before the big meal or as part of your afternoon tea time. The recipe is sized for four little tarts and can be easily multiplied to make larger batches. With creamy savory cashew cream filling and tender, flaky pie crusts, these vegan caramelized onion tarts are delicious served hot or cold!

I originally made this recipe when I was newly vegan in 2011. It was just before my first Thanksgiving as a vegan and being the holiday cook of the family, I was determined to knock everyone’s socks off. So I infused these little tarts with as much flavour and creaminess that I could. And years later, they’re still a hit everywhere they go! So whether you’re baking just for yourself or non-vegan friends and family, making Thanksgiving appetizers or just a snack, give these Vegan Caramelized Onion Tarts a go! They’re so easy to make! 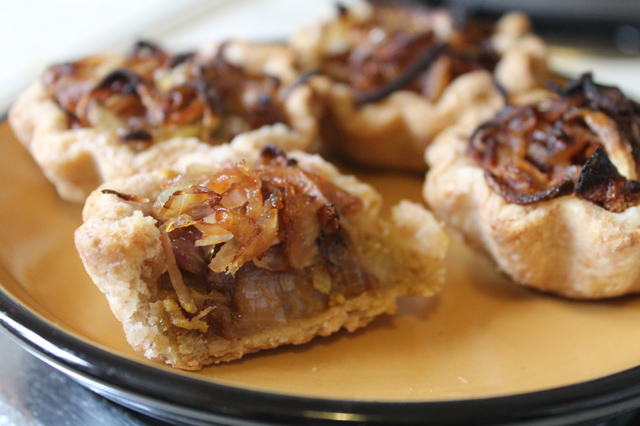 Directions
For the pie dough (if you’re using frozen pie dough, skip ahead to the next section):
Using a CHILLED mixing bowl, mix together the flour, salt, and sugar. Next, use a pastry blender to cut the shortening into the flour until the mixture is at a coarse meal texture. You can have some larger chunks as big as peas, but no bigger. A food processor can be used for this as well, but be careful not to over process. Next, add half the ice water to the bowl. Use a chilled fork to mix the water in. Mix well. Test the dough by grabbing a handful and pressing together lightly. If it sticks, the dough is ready for the next step. If not, add more water, a tablespoon at a time, mixing well, before testing again. Once the dough is to the desired consistency, form it into a ball, wrap it in plastic wrap (or place in a sealed container) and let it rest in the fridge for at least 30 minutes.

Caramelizing the Onions:
In a pan, heat the oil until hot, but not smoking. Add the onions and cook on medium until soft, sweet, and golden. They don’t have to be truly caramelized. Stir occasionally so that the onions don’t stick or burn. Set the those onions aside. For a more in-depth recipe on how to caramelize onions properly, visit this link.

For the Cashew Cream:
In a tall cup or blender, mix the cashews, garlic and seasonings with about 1/4 cup of water. Use your stick blender or regular blender to blend it smooth.

Assembling the Tarts:
After the dough has rested, prepare a rolling surface by dusting with white flour. Roll the dough out to a bit thinner than 1/4″ thick. Cut out rounds to fit your tart tins. Then, line each tin with a round of dough.

Next, divide the cashew cream evenly among the tarts. Then, layer the onions on top.

Bake the tarts in a preheated 425 degree oven for 25 minutes or until the crust is golden. Let rest for at least 5 minutes before serving. May be served hot or cold.

*the vegetable bouillon I used doesn’t seem to be as salty as some. To be on the safe side, blend the cream ingredients together with only half the amount and give it a taste before deciding on whether you want to use the whole cube.

This recipe is part of the Vegan Thanksgiving 2011 Project. To see the rest of the menu, click here.

Edit December 7, 2015: The ingredient list showed 3/4 cup water for the cashew cream while the instructions say 1/4 cup. This was clearly a typo and I apologize to anyone who ended up with a watery cashew cream! Thanks to my friend Kim who pointed this out to me. 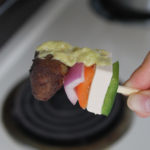