Fall over this delicious cornbread stuffing, smothered in herb mushroom gravy, in warm roasted eggplant. It’s my favourite vegan Thanksgiving recipe yet! This Thanksgiving Dinner feature will amaze your veggie AND omni guests! It’s so good, you may want to serve it at Christmas too! 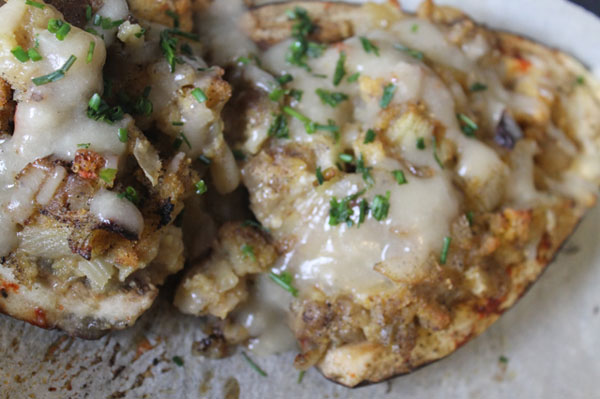 Prepare the eggplant:
Preheat oven to 350 F. Prepare the eggplant by cutting in half, length wise. Hollow out the eggplant, leaving about 3/4″ on the skin. Brush the eggplant shells with olive oil on all surfaces. Place onto a roasting pan, lined with parchment paper. Salt both halves generously. Sprinkle on some poultry seasoning and cayenne if using. Chop the removed eggplant into 1/2 cubes and set aside.

Note: if you prefer oil-free, just leave out the oil in this step. The texture will come out different, not as pretty, but will still taste nice.

Prepare the stuffing:
In a large pan, heat oil on medium high. Add garlic, onions, and celery and saute until lightly browned. Add the cubed eggplant and just enough water to submerge the ingredients half way. Stir in the vegetable bouillon cube until dissolved. Add poultry seasoning. Cook until the eggplant is soft. Add salt and pepper, adjusting for taste. Remove from heat, then stir in the corn bread.

Note: if you prefer oil-free, forget the oil and use the water saute method to soften the veggies.

Assemble and bake:
Fill the eggplant shells with the cooked stuffing. Carefully, place the oven-safe cup/bowl, filled halfway with water, in the roasting pan. Cover the pan and place in the preheated oven. Bake for 20 minutes covered. Remove the lid and carefully remove the cup of water. Bake, uncovered, for an additional 10 – 15 minutes or until the top of the stuffing is lightly browned.

Prepare the mushroom gravy
In a saucepan, whisk together all the gravy ingredients until no lumps remain. Heat on medium high, continuously whisking, until the sauce boils. Turn down heat to medium and keep whisking until the sauce become thick. Remove from heat.

Note: if you prefer oil-free, leave out the oil in the step. You may like to add some cashew cream instead or leave the overt fat content out all together. The flavour will be affected but will still be delicious.

Serve!
Place the roasted eggplant on a serving dish and drizzle the gravy over top. Slice the eggplant cross-wise to serve.

This amazing dish is surprisingly easy to make and absolutely scrumptious! I really hope you try it!

This recipe is part of the Vegan Thanksgiving 2011 Project. To see the rest of the menu, click here. 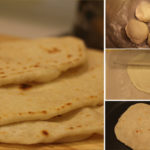