Make homemade vegan kimchi easily with this recipe. You’ll love the garlicky and spicy, tangy and salty flavour of this fermented vegetable condiment. Kimchi is eaten as a side dish in Korean meals but can also be the main star in recipes like kimchi jigae (kimchi stew). While kimchi often traditionally contains fish or shrimp, I’ve been able to recreate the flavour without the animal products. Click here for the printable recipe. 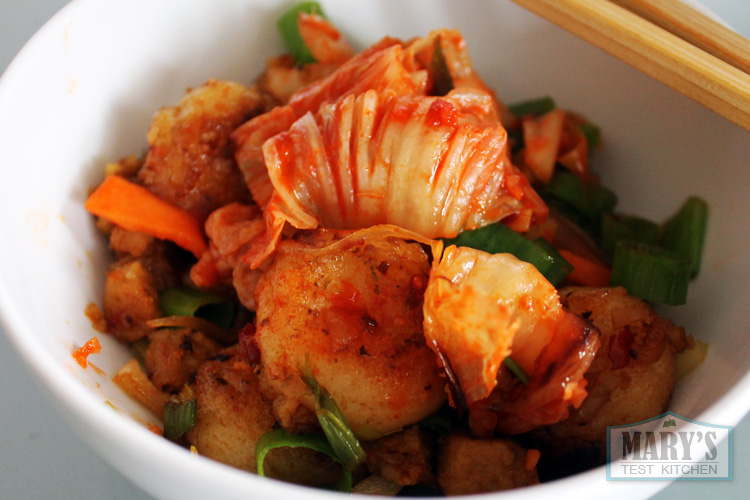 Kimchi is similar to sauerkraut as it’s a fermented vegetable food, but at the same time, it tastes completely different. There are hundreds of ways to make kimchi. This particular vegan recipe uses napa cabbage as its main ingredient.

Kimchi makes a wonderful way to get fermented vegetables in your diet. Because it’s easy to make a big batch and because it stores well in the fridge for months, this vegan kimchi will quickly become your go-to convenient condiment to add flavour and spice to dishes like fried rice, plain rice, stews, sandwiches and more!

As mentioned before, there are many types of kimchi but the most common store-bought kimchi usually contains fish/shrimp ingredients. Luckily, it’s really easy to veganize.

My Inspiration for this Vegan Kimchi

In 2015, I started getting requests for kimchi recipes. I kept those requests in mind but kimchi is as foreign to my taste as sauerkraut. As a Chinese Canadian growing up eating mostly Cantonese cuisine, I didn’t have much of either. I only started eating Korean food (outside of the rare Korean BBQ) in high school when my friends and I started frequenting a Korean restaurant for lunches one summer. The menu was printed in Korean and and the wait staff didn’t really speak English so we took chances by pointing at photographs on the menu. 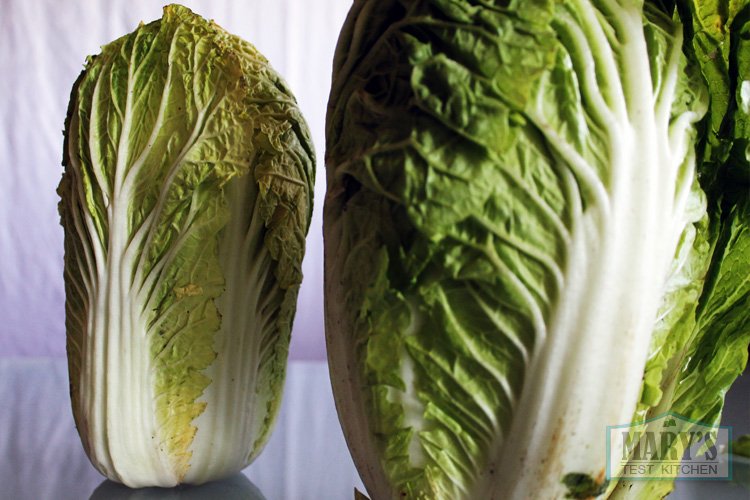 Every meal was served with banchan, a set of small dishes that included marinated bean sprouts, various pickles, including a few types of kimchi. I never did identify everything but it was tasty.

But recently, Korean food has become really popular, especially on YouTube, and I’ve been getting even more requests for kimchi recipes and other Korean foods. So I figured I’d better start learning about it. 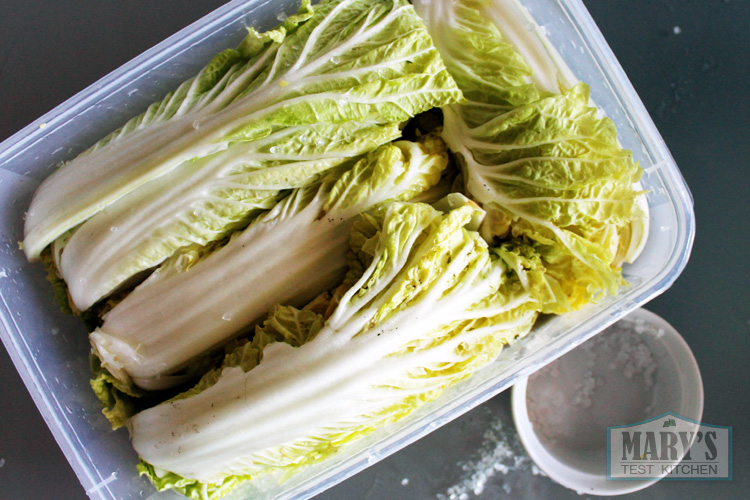 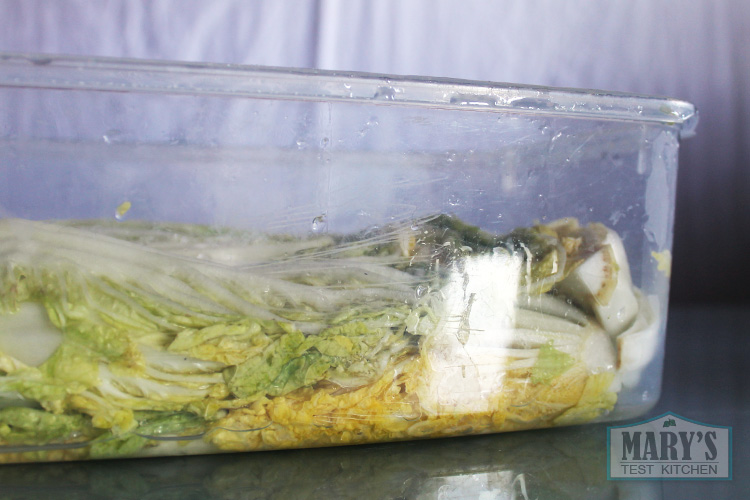 After watching a couple documentaries, countless videos (especially from MommyTang and Maangchi), I made my first batch of napa cabbage kimchi. I took ideas from other recipes and wrote up my version using what I liked (less ginger, more crunchy vegetables), and what I could get easily from my local stores. Of course, I also made some changes to replace the traditional use of fish sauce and/or fermented sea animals to make this recipe vegan. Then it was time to put what I learned into practice. I crossed my fingers hoping that I wouldn’t poison myself with botulism. 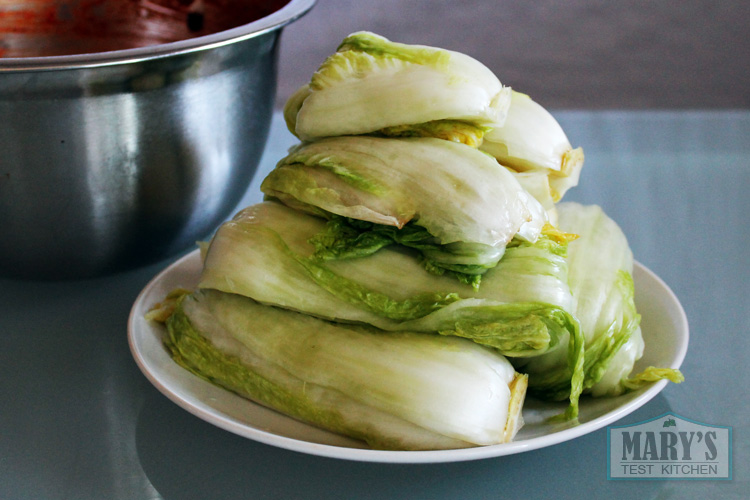 It’s simple to make homemade vegan kimchi! Salt and rinse the cabbage, cut up vegetables, make a spicy slurry with rice, and mix it all together. The bright red mixture is placed into jars, packed down to eliminate air pockets and left to ferment. Kimchi relies on anaerobic fermentation, meaning the fermentation takes place in the absence of oxygen. The lactobacillus bacteria that is basically on everything on Earth ever breaks down the sugars in the vegetables and produces lactic acid (as well as some acetic acid). This turns the cabbage sour and develops the savory flavour. 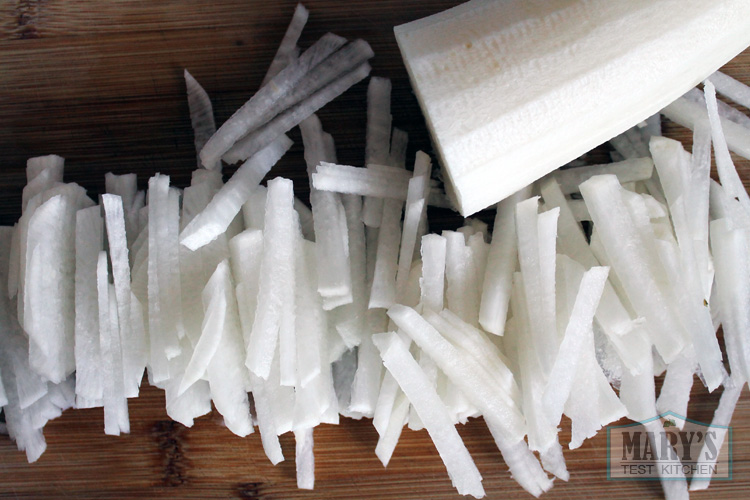 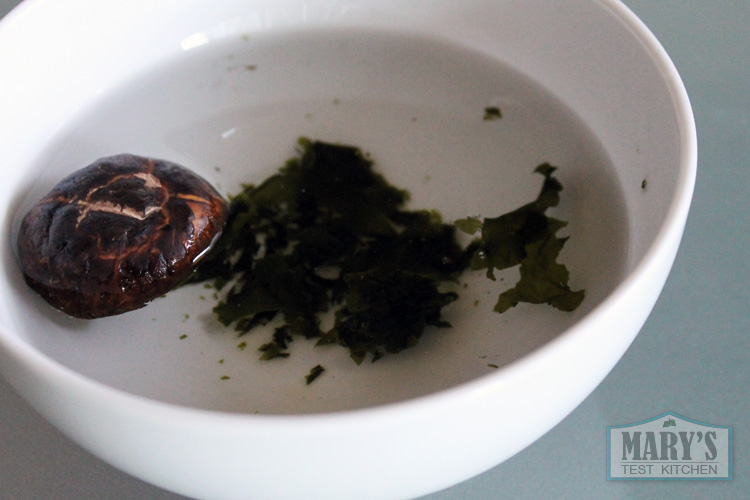 Above: The start of vegan ‘fish’ sauce: shiitake, wakame and water.

I made this batch over a few particularly chilly days so fermentation took longer than my second batch: 4 days. The first couple days, nothing seemed to happen. On the third day, liquid had visibly leeched out of the vegetables. On the forth day, bubbles appeared in the liquid and even more appeared when the kimchi was pressed down. Finally! It shouldn’t take this long on comfortably warm days. 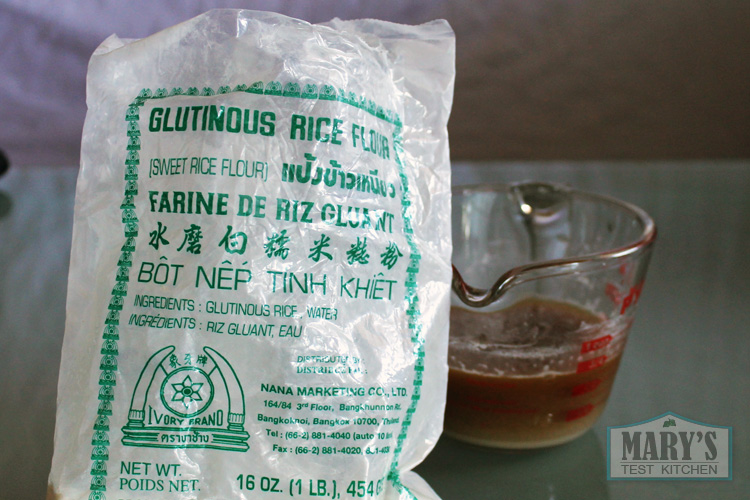 Since then, I’ve been eating kimchi almost everyday. They say that fermented vegetables are great for your gut as they contain probiotics. I can’t say I’ve noticed any difference, but then my digestion has been pretty smooth since I went vegan almost five years ago. 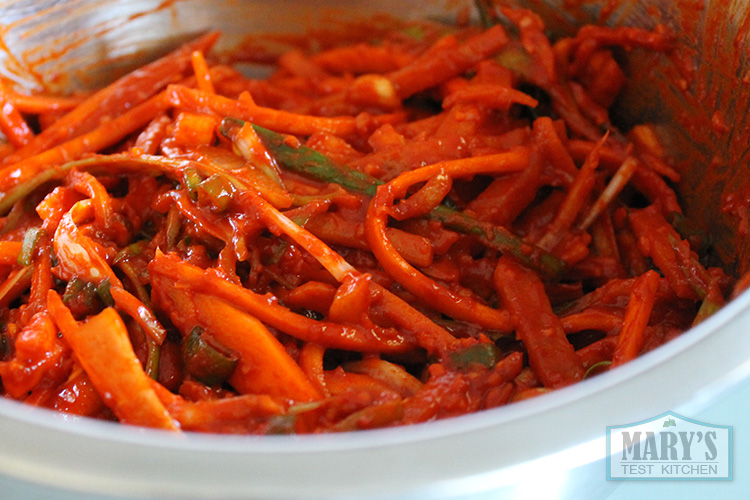 The recipe that I’m sharing in this post is only from the second batch of kimchi that I’ve ever made so this is no expert recipe. However, it’s so easy that I’m sure anyone can make it too. I’m sure I’ll tweak my own kimchi recipe(s) as time goes by. But since a single batch of kimchi lasts me about a month, it will probably be a while before I share another one. I hope you give homemade kimchi a try if you haven’t already and let me know what you think! 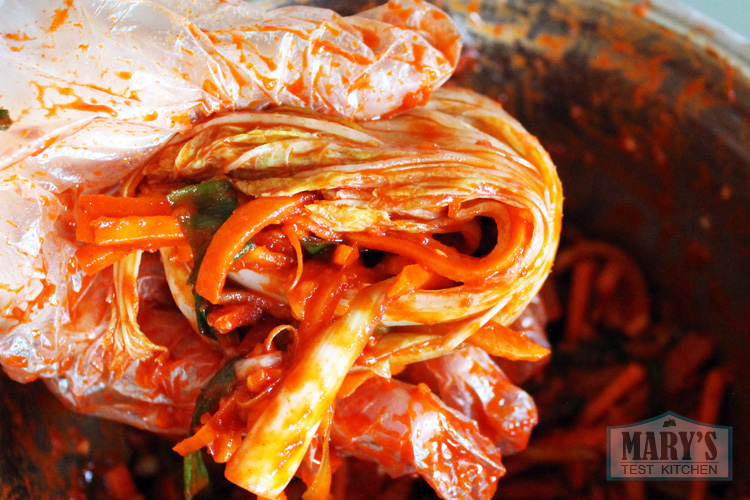 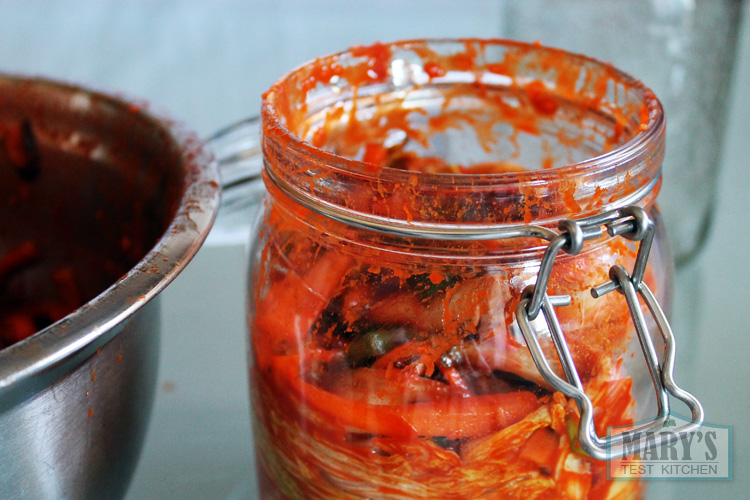 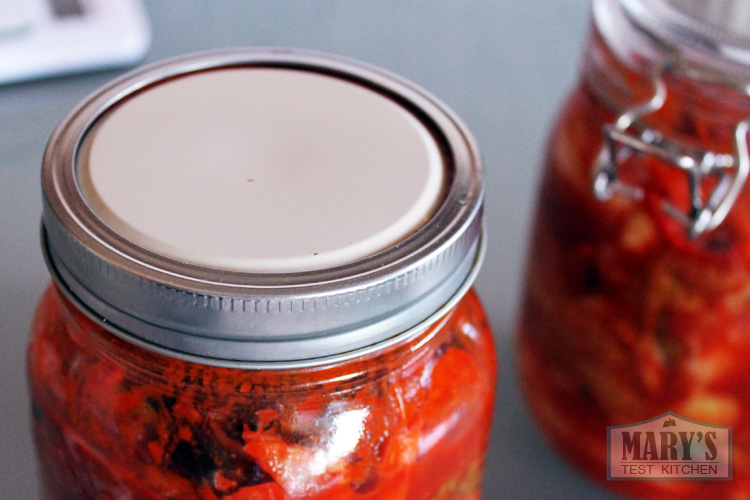 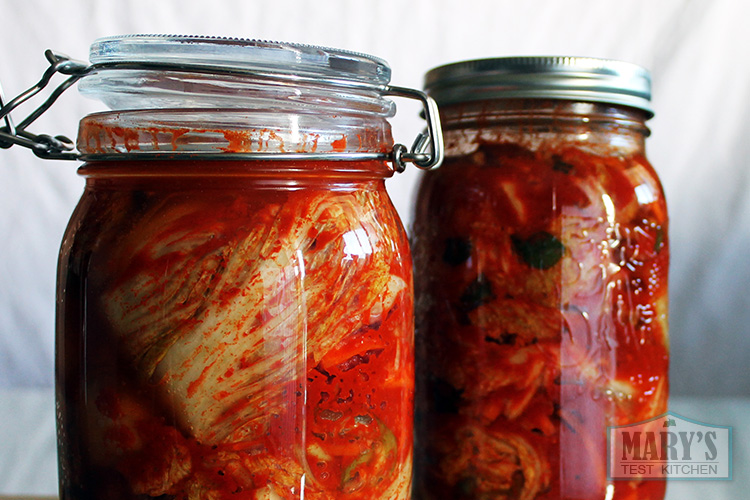 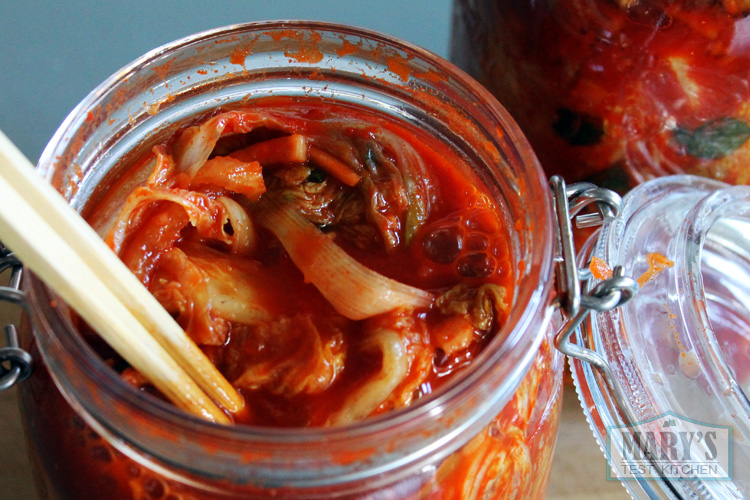 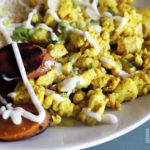 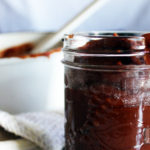