Cultured Cheese Test 1: Almond Gruyere (or why I need to write things down)

. I had been coveting it for quite some time but have been on a no-spending stretch. Well, actually, I’ve had a hard time allowing myself to buy anything other than food and necessities since I decided to start freelancing full-time. The lack of a regular paycheck has been unsettling (but SO WORTH IT).

By now, you’ve probably realized this is a bit of a bloggy blog and not a recipe. If you’re here just for recipes, please feel free to skip. I’ll have a new recipe up on Friday. 🙂

I’ve been vegan for almost three years and don’t ever crave dairy cheese. Remarkable because I was a cheese-o-holic before August 1, 2011. I would often spend way too much money at a local deli that imported different European cheeses. That said, I have had moments where I wished there was a better cheese alternative for certain recipes. I’d have moments where I thought, “Oh, some Emmental would be perfect in this seitan sandwich” or “This pear pie just needs some Gruyere on top.” But I haven’t found any commercial vegan cheeses available in my area that tasted “right.” I was pretty well resigned to just never work with these flavours again. Sure, Daiya is nice on pizza, but it has it’s own distinct flavour that is not like dairy cheese IMO. I’ve also experimented with “cheesy” ingredients like nutritional yeast that yield great tasting results but they are their own yummy foods; still NOT a dupe for dairy cheese. I’ve tried so many vegan cheeses and generally appreciate them for what they were.

Anywho, a friend of mine hosted a vegan cheese and wine tasting party where she served her own homemade vegan cheeses and as well as a cheese spread from Glow Food, a vegan food upstart from Banff, AB. It was amazing! It ACTUALLY tasted like dairy cheese with all the funk, sharpness, and plain ol’ cheesiness of the real thing. It was one of those “are you sure it’s actually vegan?” moments. One tasted like gouda, another like aged cheddar, one shallot flavoured cheese that was mind-blowingly awesome. I was in vegan cheese heaven. 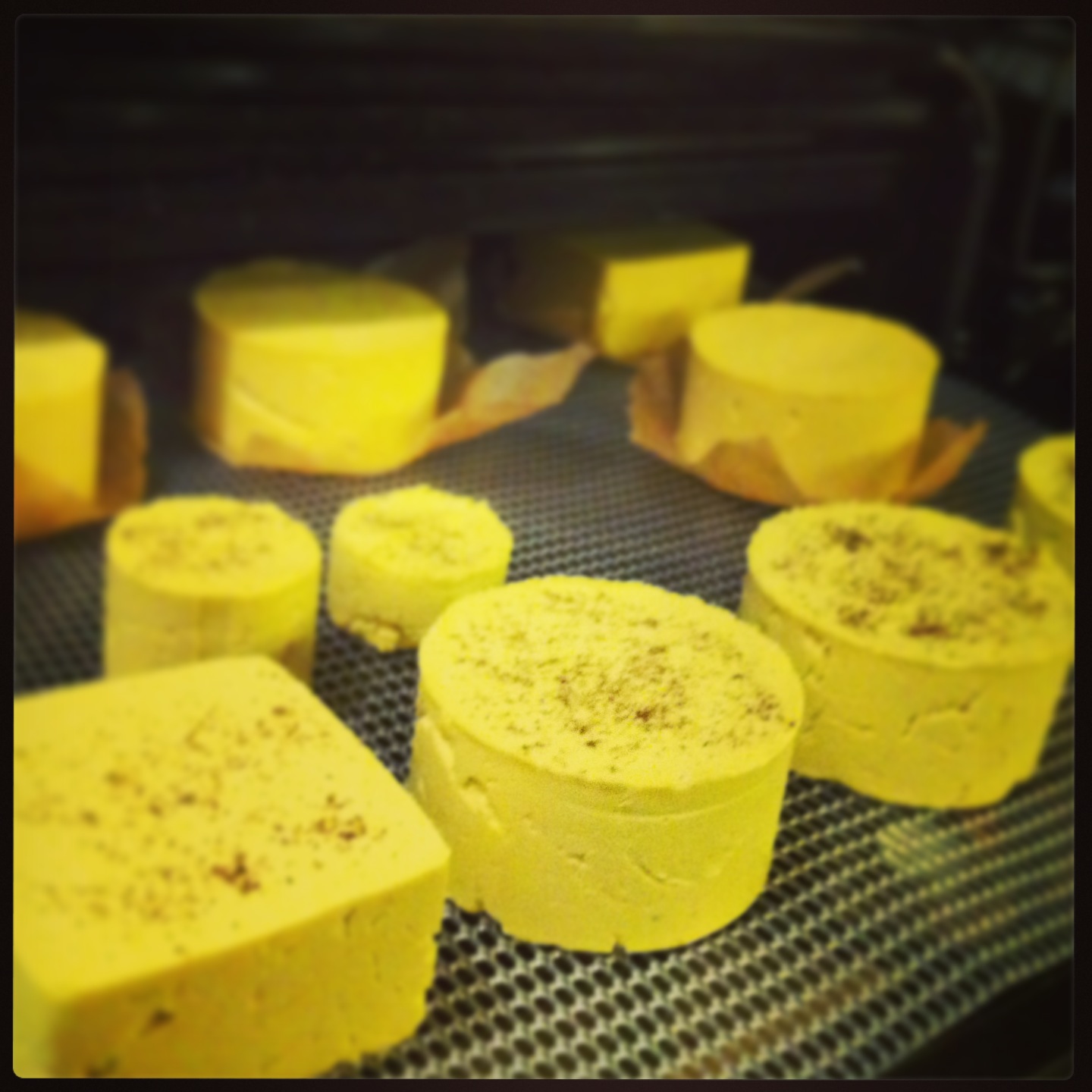 Vegan cheese from Glow Foods in Banff, AB. This image is from the owner’s blog. I was too busy eating to take a pic of the platter from the party. 😀

Turns out, my friend had been working out of Miyoko Schinner’s book. After this delicious event that changed my mind about what vegan cheese could be, I knew I HAD To buy this book. Lucky for cheapy-cheap me, it was less than $15 on Amazon

As soon as it arrived, I read it cover to cover and immediately started a batch of rejuvelac from some organic wheat berries that I had in the cupboard. Some of the concepts were familiar to me; general flavouring ingredients like miso and nutritional yeast, but she also explained issues around temperature and storage. With renewed enthusiasm, I spent the entire weekend reading all I could about culturing cheeses. I also read through The Non-Dairy Formulary by Chef Skye. I purchased the e-book months ago but was not motivated to read it in depth. It was unfortunately in a PDF format, making for an uncomfortable reading experience. I really wish he would re-release with a e-pub version with flowable text. In fact, I wish ALL publishers would do that for their e-books (pet peeve of mine since I know how to do it and it’s so easily done).

This is about two thirds of all the rejuvelac.

Unfortunately, I had already surpassed my grocery budget for that week. No buying cashews or carragenaan or any of the other specialty ingredients for me! Not to be discouraged, I found that I had some raw almonds soaking in the back of my fridge. Opened the lid; it smelled ok… Actually, I admit, it was a bit funky. But I rinsed it a few times and it smelled ok again. TMI? Maybe I just convinced myself that it was still “food safe” because I wanted to start making cheese so badly.

So I got the skins off and blended the almonds with a bit of rejuvelac. Tasted it. It tasted like raw almonds with a bit of tanginess. I poured the mixture into a small ceramic bowl, covered with a coffee filter and tried my best to forget about it. Of course, over the next couple days I poked at it and tasted it. Quickly, it developed a musky, funky taste. Very much like goat cheese. One might call this a success, but I’ve always hated goat cheese. I had my first taste of goat cheese around the age of 19. It reminded me of dirt and greasy hair. I’m not saying this first attempt at cultured almonds tasted like dirt and greasy hair…but then again, I’ve never tasted greasy hair.

Salted block of cultured almond in the dehydrator.

A bit disheartened, I formed it into a block, salted all the sides and stuck it on a piece of parchment paper. I figured more culturing time couldn’t hurt so I put it in my dehydrator on the lowest setting. I was hoping the warmth would encourage more flavour development and the drying would improve the soggy texture. Meanwhile, I started a batch of Basic Cashew Cheese from the Artisan Vegan Cheese book.

After a couple days, the condo smelled like a cheese shop and I figured I wasted enough electricity so I took the cheese out of the dehydrator and tasted. More goat cheese flavour. Now it was just really salty as well. Great. I put it into a container and stuck it in the fridge without an inkling as to what I would do with it.

A few days later I was cleaning out my fridge. There sat that failed block of mushy almond goat-cheesiness taunting me. Trying to salvage it, I added miso, nutritional yeast, and some other stuff to it. Mixed it thoroughly with a fork and let it sit on the counter. The next morning, I tried it. I could not believe it. The smell, the taste. It had transformed into something magical. Was it just my wishful thinking? Taste some more. It really DID taste like what I thought: Gruyere Swiss Cheese! Nevermind that the texture was completely wrong, but the flavour was there.

Over the last week, I’ve been enjoying it on sandwiches and on crackers. I’ve also been remembering why I was so addicted to cheese before.

Alas, because I thought the almond cheese was a lost cause, I didn’t write down the amounts or ingredients that I used in it. Did I add vinegar? I think so. Lemon juice? Pepper? More nutritional yeast? I don’t know! I tried to replicate the result with the Basic Cashew Cheese as a base but the result was something that tasted more like sour yogurt. I will have to try again the next time my grocery budget allows for buying more raw almonds. I’ll keep you guys posted as I go.

So TL;DR: Made vegan cultured almond that tasted like dairy Gruyere using inspiration from Miyoko Schinner’s book. I didn’t write down the ingredients/amounts used. Big mistake.

So my dear friends, have you tried making vegan cultured cheeses? What successes have you had? I’d love to read about everyone’s vegan cheese-making adventures 🙂

Update: I finally made a cheese that tastes very similar to the one I described in this post. It’s not exact but it’s very close and very delicious. Check out my Air-dried Almond Gruyere Recipe here.