This past Saturday, a few girlfriends and I traveled to Edmonton for the sole purpose of finding delicious vegan food. Three out of four of us had never been to Alberta’s 2nd most populous city and we were pretty excited, having heard lots of good things about the city’s vegan-friendly offerings. Though we all had ideas about where we wanted to go, we didn’t start to narrow down our selections until we were on the road. Good thing for smartphones!

We had a couple restrictions to accommodate; one of us hated cilantro and one didn’t like onions. Our pickiest eater didn’t like Indian food (too spicy) and was wary of Chinese food (very bad food-safety-related incident). I, on the other hand, like ALL THE VEGAN THINGS!

Eventually, after perusing Happy Cow and viewing a bunch of menus, we decided on Padmanadi to start. On the bottom of their menu page they stated that all their food was actually vegan! I was more than a little stoked at that. 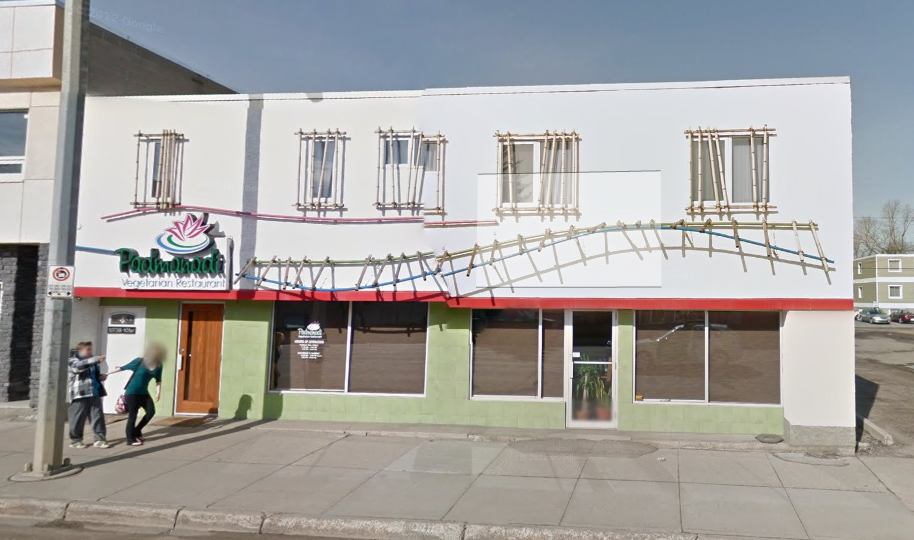 We arrived just after noon. The exterior of the restaurant was a welcome sight as we were pretty hungry after the 3 hour drive. After walking in, I immediately felt at ease. The decor included bamboo poles, natural teak carvings and accents (or at least they looked like teak), warm wood colors, and green plants. A large stone Buddha brought everything together. The restaurant was fairly empty with just a few customers and larger than I had expected.

We were greeted warmly, promptly seated by the window and given brunch menus . Almost immediately, our host came to take our drink order. It was a bit soon as I hadn’t even had a chance to open the menu and locate the drinks, but he was patient and was happy to answer all our questions. I was under the impression that Padmanadi’s was a Thai restaurant but soon learned that they offered a mix of Chinese and Indonesian dishes with some western influence thrown in.

The brunch menu featured vegan omelets, pancakes, tofu scrambles and other “normal” breakfast-y foods as well as Indonesian specialties, gluten-free options and some fusion dishes. Some very exciting options caught my eye right away, including their Curried Yam Omelet and Banana Coconut French Toast. But as soon as I saw Traditional Tofu Benedict on the menu, I knew I had to have it. My fellow diners hemmed and hawed a bit as we all wanted to sample a variety of foods, but when it came down to ordering, we all chose bennies.

Our starters arrived quickly after we ordered. The corn cakes were made with sweet corn and other veggies, made into a patty and fried. Different from what I expected but they were absolutely delicious. Crispy, sweet and savory, they were served with what tasted like plum sauce. For me, the plum sauce was unnecessary as the cakes were already sweet from the corn. 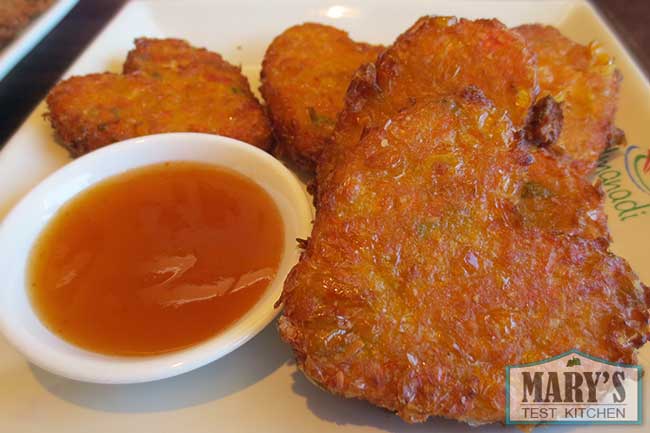 The salty vegan “chicken” strips were more familiar to us. One commented that they tasted more like ribs than chicken. In fact, we believed that they were the same kind of mock meat used as dry ribs at Buddha’s Veggie, a Calgary vegan-friendly Chinese restaurant. Still, they were seasoned nicely, crispy on the outside and pleasantly juicy on the inside. 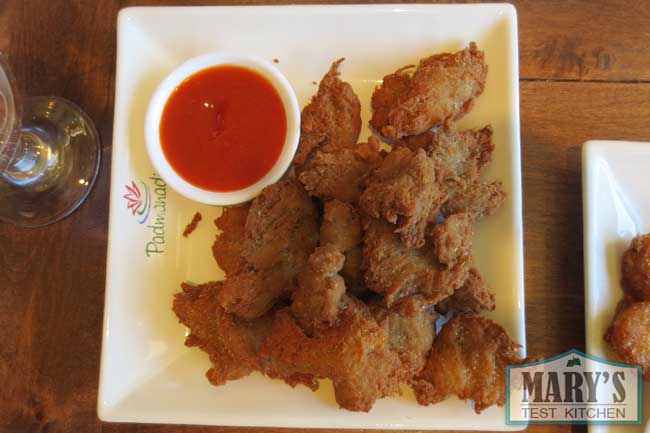 Then, having made only the tiniest dent in our appies, the Tofu Benedicts arrived! 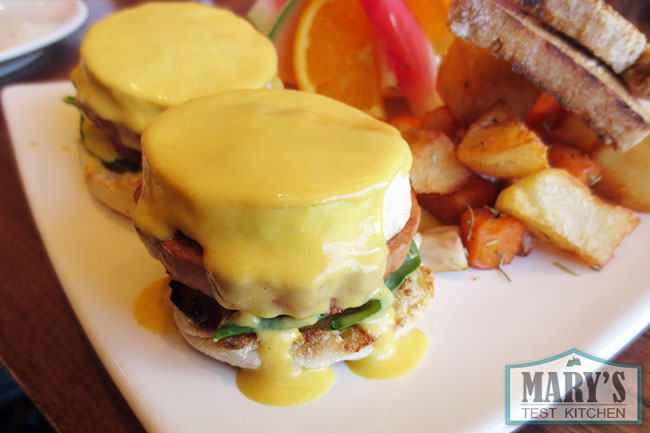 *drool* I’m craving this just looking at the photos again!

The bennies looked perfect; a base of toasted english muffin stacked high with fresh basil, a thick slice of veggie ham, round tofu, and smothered in butternut hollandaise sauce. One bite and I was impressed! Having only had one other so-called tofu benedict before that was sorely lacking in flavour, this was a most welcome surprise. The veggie ham they used tasted…well, just like normal ham. The slice was a bit thick but ravenous, greedy me was glad for it! The tofu was very soft and delicate tasting but held together well. The hollandaise sauce was rich and smooth; I couldn’t actually detect the butternut squash flavour in it. I really liked that the basil gave everything a freshness, although one of us said it was a bit too much basil. 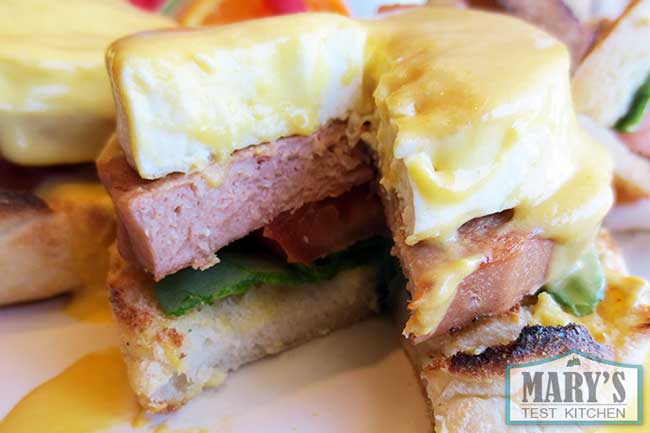 The bennies were served with a gorgeous combination of toast, fresh fruit and crispy root vegetable hashbrowns. The root veggies where cubed generously with flawlessly fluffy centers and nicely crisped exteriors. I was SO full from the bennies but the hashbrowns were so good that I couldn’t leave them on the plate! For $15 I was stuffed to the brim and didn’t know how I could possibly digest fast enough to continue our food tour!

One of us was smart enough to leave some on her plate so that she could fit dessert in and ordered Chocolate Mousse. I had only the tinest nibble as I was super stuffed, but it was delicious. Nice, airy and smooth with a dark chocolate flavour. It reminded me very much of the mousse I like to make for myself with silken tofu and semi-sweet chocolate. 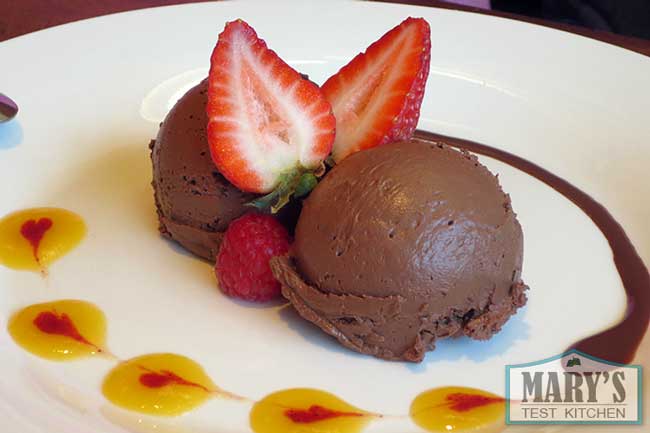 Another one of us was eating for two and ordered the Chocolate Lava Cake. It looked beautiful and was served with vanilla ice cream. Again, I had to give it a taste. The cake was not very sweet and I was kind of disappointed. But then I tasted it with the chocolate “lava.” It was a rich, high-quality dark chocolate and I understood why the cake part had to be a bit understated. I can’t wait to try it again when I’m not overstuffed! 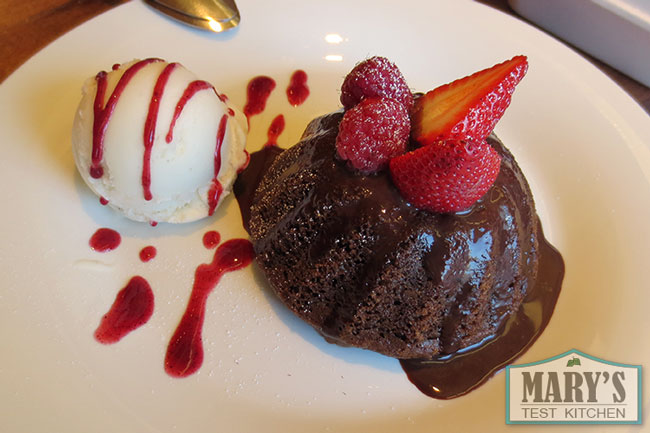 So that was brunch. Absolutely delicious, generous portions at reasonable prices, and warm, attentive service. I feel like these words are not even good enough to describe our experience.

Afterwards, we stopped by The Clever Rabbit to pick up some vegan baked goods. I’ll have to try more of their offerings to give a decent review so I’ll hold off for now. However I’ll say that they had lovely service and I loved that they had a sign politely asking guests to refrain from wearing fur in the cafe! Way to stand up for your values!

Next, a stop at Earth’s General Foods Store for some vegan chocolate bars; Go Max bars in particular. There we stocked up on chocolate and found a few vegan specialty items that are difficult or impossible to find in Calgary. Again, lovely service. At this point, I was falling head over heals for Edmonton. Everyone we encountered just seemed so darn nice!

Unfortunately, by the time we were done, the Strathcona Market was already closed and we missed our chance to grab vegan donuts from Fricken Delights. *sigh* Next time.

For dinner, we wanted to try Creole Envie, a New Orleans cuisine restaurant that has a vegan menu in addition to their regular one. Unfortunately, when we got there just as they opened, we were informed that it was their policy not to take walk-ins on Fridays, Saturdays and Sundays. We were so sad. We all wanted to try the vegan “chicken” and waffles. 🙁 After calling another restaurant and looking through more reviews, we decided to return to Padmanadi to try their dinner service.

When we got to Padmanadi at about 5:30pm, the place was quite busy. Nonetheless we were immediately greeted at the door, led to our table and given menus within minutes. I am used to only having a couple options when dining out so having a full vegan menu to pick from was a bit overwhelming. The host from brunch recognized us and came over as soon as he was able. Martin, as he said his name was (if we enjoyed ourselves; Bob if we didn’t) helped us pick through the choices and patiently explained the differences between each dish. The server taking our order was a lovely young lady who made sure to get all our orders correct as we had a few substitutions to fit some of the particular palates at our table. 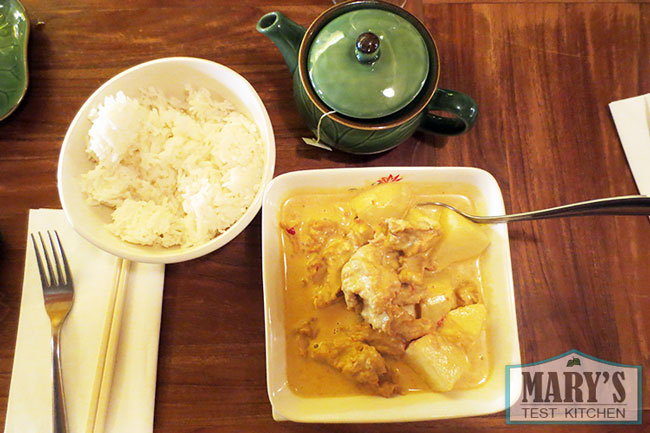 I settled on the curry “chicken” with jasmine rice. Chicken curry used to be one of my favourite dishes. I used to get it all the time when I went to Hong-Kong style cafes (which was an almost daily thing for me between the ages of 17 and 22) and made a point of having it many times when visiting China. On the few occasions when my mom felt like cooking something traditional, this was the dish I would request. This Chinese dish is different from Indian curries although it’s Indian inspired. Padmanadi’s version was absolutely delectable. 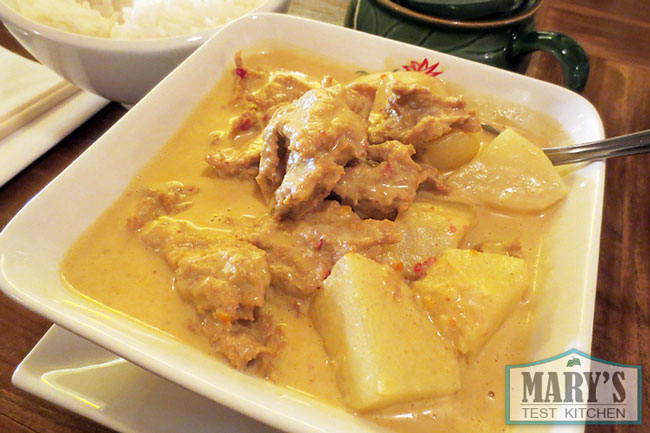 The “chicken” they used was a soy/wheat based protein that had a dense texture very much like the real thing. I had been eating a lot of faux meats lately so I’m a little tired of that but I’m sure others who like faux meat will love this stuff. Way more convincing than Gardein. The dish also had potatoes and zucchini which were super yummy. I actually wish it had more potatoes as they were THAT good. The curry itself was creamy and rich with just the right amount of coconut. Although it has a chili pepper symbol on the menu indicating some heat, I didn’t find it very spicy. That said, I put sriracha on everything and may have a high tolerance for spicy heat. When I asked for some hot sauce, they weren’t stingy and brought me a big container of chili sauce.

Next time, I think I’ll order the same thing, but less “chicken” and more potatoes and add broccoli. I can just imagine the sauce soaked up in broccoli florets now…mm…excuse me while I wipe my drool.

Our table also ordered the Lo-Han Chow Mein, Mushroom Gailan,and…more that I forget since I was just enamored with my own dish! ahaha! Everyone had only great things to say about the food. 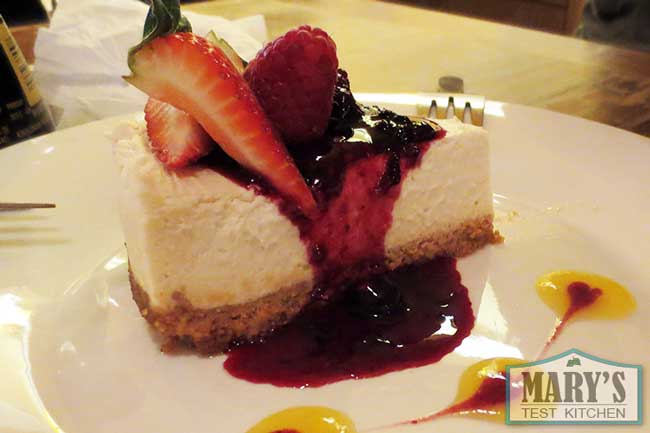 Edmonton, you rock and I can’t wait to visit you and Padmanadi’s again! 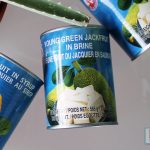