By Mary
February 9, 2022
Skip to the Printable Recipe

This simple vegan pie crust is the perfect blend of crisp and tender; flaky and buttery. You can make it the traditional way by hand or use a food processor for fast and flawless results. One batch is enough vegan pie dough to make one 9-inch pie with both bottom and top crusts.

Pin this for later or Skip to the Printable Recipe.

I started making pie crust from scratch in 8th grade and tbh, the process hasn’t changed much! In this post, I’ll share my best tips for making flaky pie crust that will turn out deliciously every time.

You can use this vegan pie crust to make any pie you like, such as my Vegan Quiche or Vegan Chicken Pot Pie!

Regular flaky pie crust is made with regular all-purpose flour, a solid fat or butter (which is fat emulsified with water), water and salt for flavour. To make it vegan, it’s easy to switch the animal-based fat with vegan options. 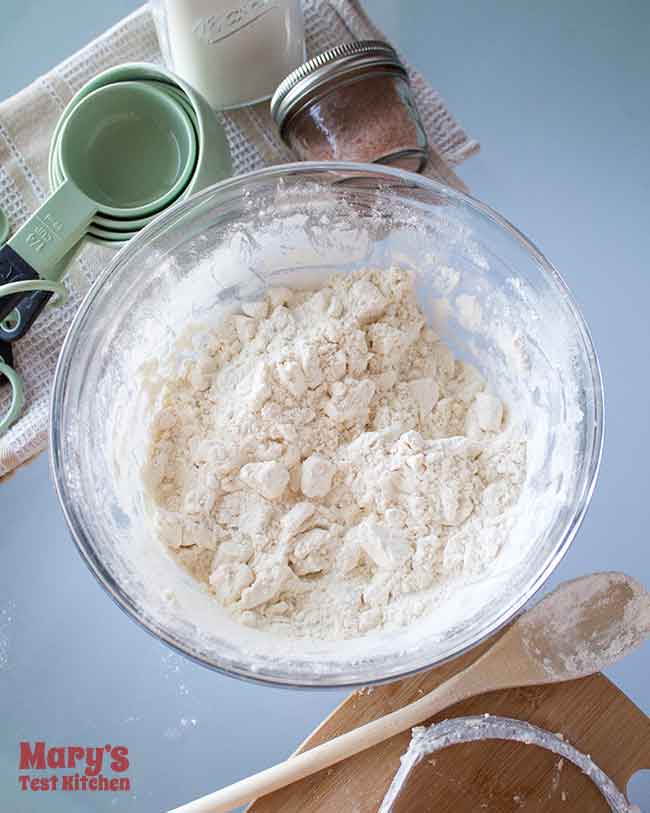 For this simple pie crust recipe, I prefer vegan butter because it makes vegan pie crust that is totally indistinguishable to traditionally made butter pie crust. My top pick is Earth Balance Buttery Sticks. However, I use Melt Organic more often because it’s more available local to me and usually at a more affordable price. I also think Miyoko’s would be a great option but I haven’t tested it with this particular recipe.

Before you try making vegan pie crust, do this FIRST!

The key to a successful flaky pie crust is to keep everything cold. So put all your equipment and ingredients in the freezer to chill. That includes your mixing bowl, whisk, pastry knife, flour, water and even the vegan butter. Just 15 minutes will do the trick.

If you’re going to use a food processor, this step is not as necessary since it comes together so quickly but it doesn’t hurt either.

How to Make Vegan Pie Crust Manually (the traditional way)

To make a vegan pie crust by hand, take your large mixing bowl out of the freezer and add your measured flour, sugar or sweetener and salt. Mix them with your chilled whisk. Sometimes I’ll mix quickly by hand when I want to minimize the amount of dishes I’ll have to do later. But especially if you’re a beginner at making pie crust, I recommend using tools to avoid adding warmth with your hands. 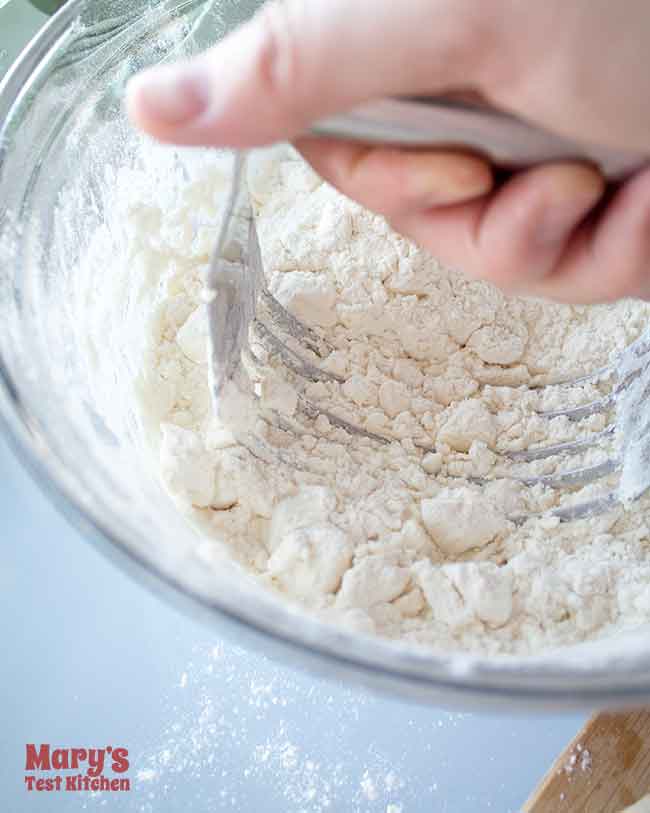 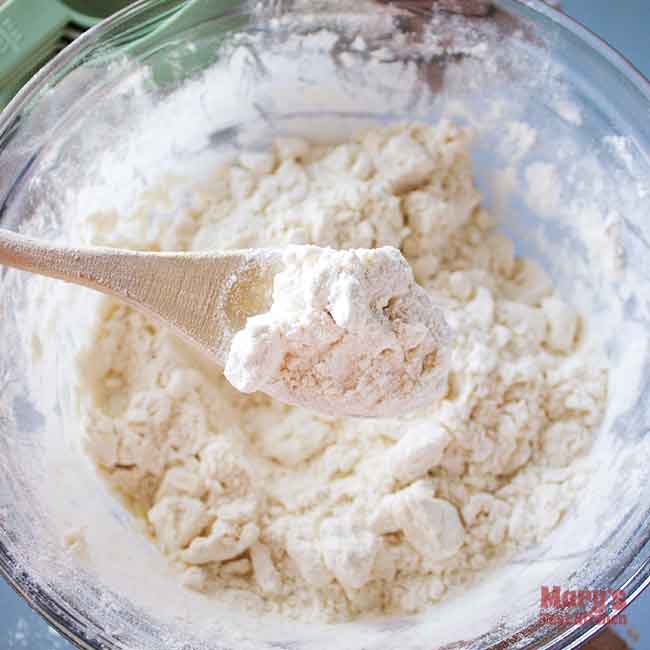 Now, you’ll drizzle over 3 tablespoons of ice cold water and mix it in with a chilled fork. When it’s well distributed, add more water but just a tablespoon at a time. Depending on the humidity of the day, you might require more or less water. You’re aiming for just enough hydration that will form large clumps of dough. I usually test this by grabbing a handful of dough, lightly squeezing and seeing if it stays together. If it does, you’re good to go!

Transfer the raggedy dough onto your clean work surface. Bring the pile together, then work the outsides into the middle a few times so the dough really comes together. Stop when you have a cohesive dough that is still a little rough with visible bits of vegan butter. 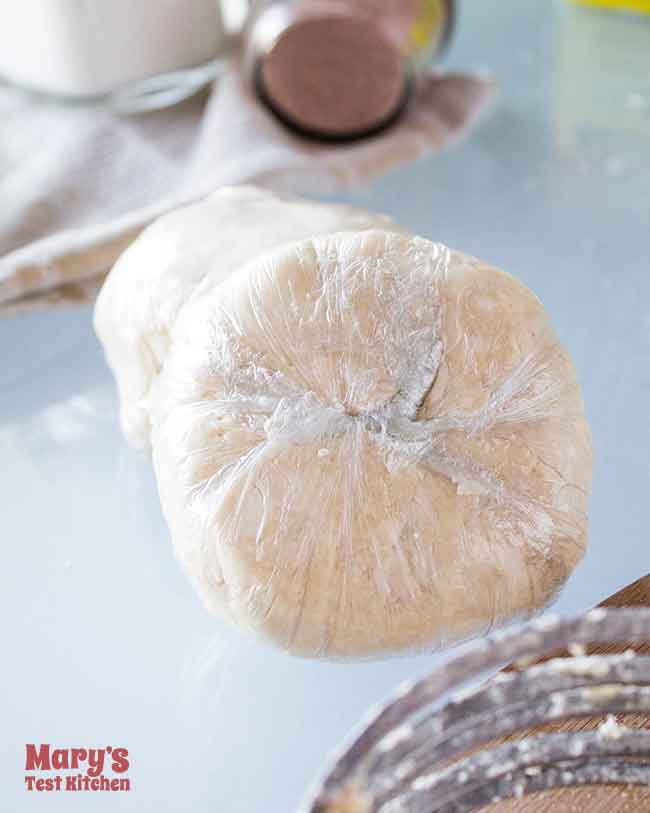 Then divide your rough dough into two portions and wrap well with plastic wrap. Chill the dough for at least one hour in the fridge. This will give time for the hydration in the dough to fully distribute and relax the gluten so the pie crust dough will be easy to roll out later.

How to Make Vegan Pie Crust in a Food Processor

Using a food processor is the easiest and quickest way to make great pie crust every time. One difference from the manual method, is you should cube up your butter before chilling it for 15 minutes in the freezer.

Then, combine your flour, sugar or sweetener and salt in the food processor bowl and pulse once to combine.  Afterwards, add the chilled cubed butter and pulse a couple times. Like with the manual method, the mixture will resemble a coarse meal with butter pieces about the size of a pea. A bit larger is fine too as we’ll be pulsing again after adding 3 tablespoons of ice cold water.

At this point, you can continue to add water, one tablespoon at a time, until the dough forms and starts to move around in the bowl as a clump. You can carefully remove the dough and then divide it into two portions. Wrap them up with plastic wrap and let them rest in the fridge for at least an hour. 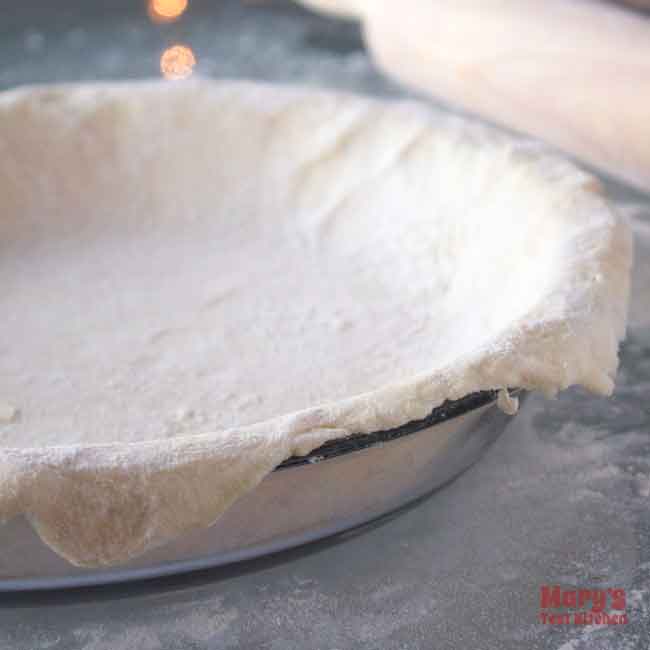 Cut the vegan butter roughly into cubes. Then chill the mixing bowl (and blade if you’re using a food processor) and pastry cutter or two knives (if doing manually), and pie crust ingredients in the freezer for at least 15 minutes.

Combine the flour and salt in a mixing bowl. Add the vegan butter and use a pastry cutter (or two knives held together) to cut the butter into pea-sized pieces. It will resemble a very coarse meal when you’re done.

Drizzle over 3 tablespoons of ice-cold water and mix with a fork. Then, add one more tablespoon of water over the dry bits and stir. Repeat with a little bit more water at a time, stirring between each addition and stop when most of the dough can clump together. You can test it by grabbing a handful and squeezing it quickly together. If it stays together, that’s probably enough water. You may need a little more or less water than indicated depending on the humidity of the day.

Transfer the raggedy dough onto your clean work surface. Bring the pile together, then work the outsides into the middle a few times so the dough really comes together. Stop when you have a cohesive dough that is still a little rough with visible bits of vegan butter. It shouldn’t be totally smooth and some parts of the dough will be wetter than others. That is OK.

Make the Pie Crust (with a food processor)

Combine the flour and salt in the food processor. Add the cubed vegan butter and pulse once or twice. The butter pieces should be a bit bigger than pea-sized. Add 3 tablespoons of ice water and pulse a couple more times. Then continue to add water a tablespoon at a time between pulses and stop when the dough forms and starts to move around the bowl.  You may need a little more or less water than indicated depending on the humidity of the day.

Carefully transfer the dough to your clean work surface.

Divide the dough into two parts and wrap in plastic wrap OR place in very well fitting air-tight containers. Let it fully hydrate by resting in the fridge for at least 1 hour. You can make this dough up to 3 days before using.

Make sure the vegan butter you use is the type that is quite solid at room temperature. 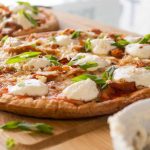 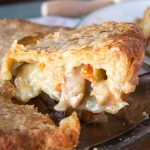