At the start of this year, I decided to start doing cookbook reviews as I have a ton of them and it would be a good excuse to actually pull them off the shelf and make recipes from them. So of course, my first cookbook review is not actually for a cookbook and not actually one off my shelf. I saw a random tweet about Julieanna Hever’s new book: The Vegiterranean Diet. This led me to buy the Kindle edition. E-books are not really my thing (I just really like having a physical copy), but I was already on my tablet, feeling lazy and curious at the same time. As I spent the afternoon reading, doing a review just felt right. 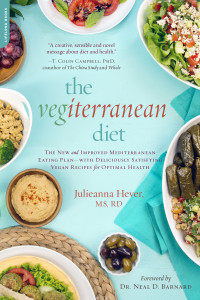 Like I mentioned, The Vegiterranean Diet isn’t a cookbook. It’s more of a diet guide to help people understand the benefits of the much lauded Mediterranean diet, dispel some myths about it and improve upon the diet by taking away some of the less healthful components and emphasizing plant-based whole foods. Though there seem to be so many books touting diets at this time of year, I was drawn to this one because I’m familiar with Hever’s social media presence as a vegan registered dietician. Countless “gurus” spout diet and health advice without credible evidence (ie. the scientific kind) especially in the online vegan world so Hever’s science-based approach is refreshing.

The book starts with a bit of a history lesson, describing how the “Mediterranean diet” came to be as we know it. Hever’s writing style is conversational but concise so I found myself thoroughly entertained while feeling like I was learning something. In logical fashion, the book goes on to cover the benefits and myths about the Mediterranean diet and then how a plant-based version of this diet was more ideal. I appreciated the fact that Hever backs up her assertions by pointing to credible sources and scientific studies.

But the part of the book I was looking forward to the most were the recipes! Overall, the recipes rely on minimally processed or whole food plant sources. No oil is used but fats in the form of whole foods such as olives, avocados, nuts and seeds are included. Over the weekend, I tried several recipes.

Video Book Review For The Vegiterranean Diet by Julieanna Hever

My trip to the grocery store was full of disappointment as they were out of many of the ingredients I needed for the recipes I wanted to try. Don’t misunderstand though; the recipes had fairly common ingredients. There must have been some supply chain issues with my local store as there were lots of empty shelves. So one of the first recipes I tried was this Hatz Lentil Stew just because I did have the ingredients on hand!

I did have some doubts about the recipes as it called for way more cumin and turmeric than I would ever put in my own recipes. However, I decided to trust the recipe and do it without my own improvisations.

The resulting soup was spicy and full of flavour. Unfortunately, it also had a strong bitter taste. I learned later that turmeric needs to be heated thoroughly when used in larger quantities, otherwise it tends to impart a bitter flavour. I do live at a somewhat high altitude so I may have needed to adjust some cooking time so I don’t know if others will have the same result. Nevertheless, I would make this recipe again but adjust the cumin and turmeric to a level that I’m more used to.

The recipe was easy to follow and took about as long as a regular bread recipe. The result was a dense loaf with a texture that reminded me of a heavy corn bread or banana bread. Right out of the oven, I had a couple slices with some Earth Balance buttery spread. It had a really nice taste and the hemp seed topping was a nice touch. However, as the bread cooled down, it took on a more gummy mouthfeel. I found that this was improved if I sliced the bread thin and toasted it on the stove. 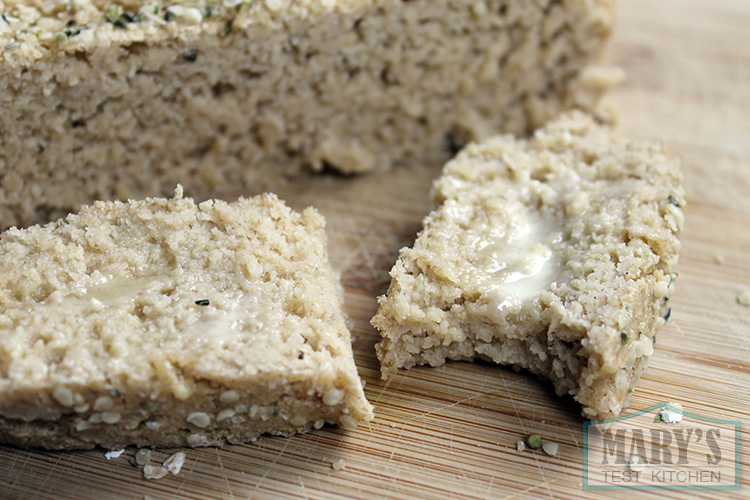 The next couple of recipes can be found in Hever’s free meal plan, available here: http://plantbaseddietitian.com/vegiterranean-sample-meal-plan/

This creamy White Bean and Rosemary Dip was my favourite! For this dip, I had to heat up all the ingredients together before blending; a step I don’t normally see for bean dips. It was worth the extra effort though. She includes lemon zest in this recipe which is something unexpected and added a wonderful brightness. I will definitely make this again.

Last, I tried the Chocolate Crispy Fruit Squares. These fruit squares remind me of some sticky walnut sweets that I would get as a kid only with additional ingredients. They are super dense, sweet and it’s hard to believe that they are “dietitian approved!” 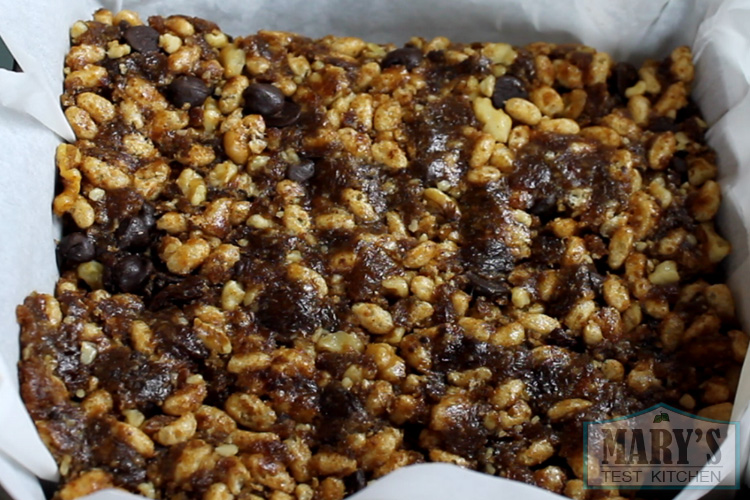 You’re supposed to make this in a food processor but you guys know I don’t have one so I made do with my bullet. It worked. Kind of. Just blitz everything, mixing one ingredient at a time. Dates, raisins, walnuts, chocolate chips and some puffed rice. Press it into a pan and chill and it’s done. I love that these are so easy to make and I know I’ll be adding these to my purse stash. 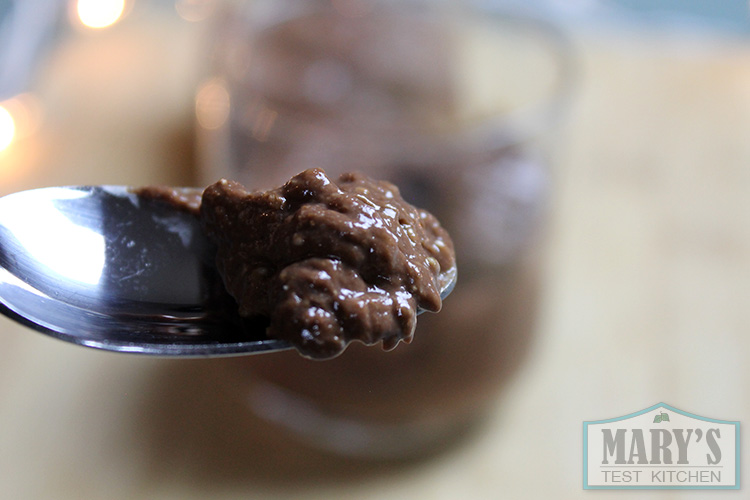 As a cookbook (which this isn’t), it has a decent number of recipes for all meals of the day plus snacks. The instructions are pretty clear but are only in US measurements; fine for me because Canadians are usually familiar with US, Metric and Imperial units. The downside though is that there are no pictures! I really need great photos to motivate me to pick up a cookbook and actually make recipes from it. If I wasn’t doing a review, I wouldn’t have made any of these. That said, I’m really glad I did. I appreciated that most of the recipes use ingredients that are common (potatoes, tomatoes, beans, lentils) and generally inexpensive (especially when in season).

As a healthy living guide, it is full of great, well-backed up advice and tips. I could see this being useful for someone starting out on a plant-based diet or even long time vegans that don’t have a lot of nutrition knowledge. Hever addresses many of the major concerns around switching from a Standard American Diet to a plant-based one. She goes into detail regarding specific nutrients such as iron, protein, B12 and Vitamin D, as well as which plant foods contain these nutrients.

After arming the reader with nutrition knowledge, she explains how to incorporate it into an everyday lifestyle, complete with recommendations for making make-ahead meals, stuff for kids, and easy, quick, snack ideas that don’t require any work.

I would recommend this book for those looking for a simple way of eating a healthly, plant-based diet that doesn’t require many uncommon ingredients; the whole food approach really helps with shopping in regular grocery stores. Also this is great if you want to learn about which plant foods have what vitamins and minerals in an easy-to-follow read without too much jargon.

Find the book on Amazon.com 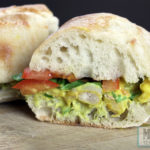