While there are lots of types of cinnamon rolls, MY idea of the perfect vegan cinnamon roll is composed of a soft, fluffy roll of bread, cinnamon and sugar, with a gooey, caramelized and slightly crispy base and topped with plenty of cream cheese icing. Skip the ramble and go straight to the video tutorial and printable recipe. Or pin this for later.

When I was in high school, there was a 24-hour coffee shop nearby called The Grind. Some friends and I used to hang out there, nursing our drinks for hours while gossiping, sort-of studying and generally being obnoxious teenagers. Of course, we weren’t that obnoxious. We made sure to buy stuff while we were there. They had two things that were quite incredible: lasagna and cinnamon rolls. I’ll save talking about lasagna for another day as we’re on the topic of cinnamon buns (although they do deserve a post of their own). These cinnamon rolls were huge fluffy things that could be shared between two people or even three. The caramelized bottoms were sweet, gooey and slightly crispy all at the same time. There was never enough icing though.

While I was in college, one of my two full-time jobs was at a local cafe. There I learned the secret. Many local coffee shops got the very same cinnamon rolls (and lasagna for that matter) from a single supplier: Daniel’s Kitchen. I was surprised to learn that we received them only once per week. And frozen at that! In the morning, we would take a batch or two out of the freezer to defrost on the counter. By afternoon, they were room temperature and ready to eat. When customers ordered them, we would heat them in the microwave for a 20 seconds or so before plating them with some whipped cream. People loved them; some came in just for cinnamon rolls and got dreadfully upset when we ran out (which was often).

Now, my coffee-slinging days are over (I think!), but my cinnamon roll days are not! I had a potluck to go to but I wasn’t sure what to bring. It was to be held quite a distance from my home so I didn’t want to bring anything that had to be kept hot. Then, a new friend mentioned that they hadn’t had a cinnamon bun since going vegan. So that settled it: cinnamon buns it was! Not just that, they had to be worth the long wait.

Then I rolled it out, slathered it in Earth Balance and piled on the cinnamon and brown sugar.

After washing my sugared up hands, I rolled up the whole thing, pinching the ends closed and letting the log rest for a few minutes with the seam down while I cleaned up my kitchen and made the cinna-goo. Cinna-goo? Yea, I made that word up. It’s the goopy stuff at the bottom of the pan that bubbles up around the buns while baking.

Back on to my clean cutting board, I cut the cinna-log up into 1 1/2 inch sections.

Poured the cinna-goo into the pan and placed our little rolls on top, leaving space for them to expand. It needs about another hour to rise under a damp cloth. At about a half hour into this wait, I turn on my oven to 400°F.

The buns get pretty big; about double in size. Then it’s time for the oven! I put a cookie sheet on the bottom rack just in case any of the gooey stuff bubbles up over the top of our baking pan.

I baked them for about 18 minutes until they were golden but not too browned. I didn’t want the cinna-goo to burn.

These are actually better than the omni cinnamon buns I used to love. Because they have MWOAR ICING!! MWOAR MWOAR MWOAR!! HAR HAR HAR!! 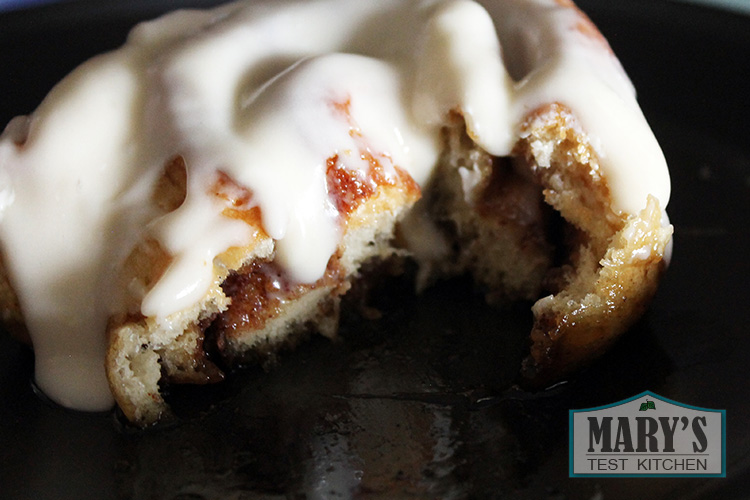 To make the rolls 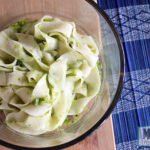 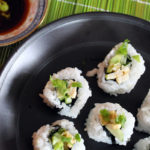